Free shipping. Free returns. Delivery in 7 business days.
Menu
Sign In
You have not set the menu to show in this store view yet.
Language
Nederland (EN)
Account 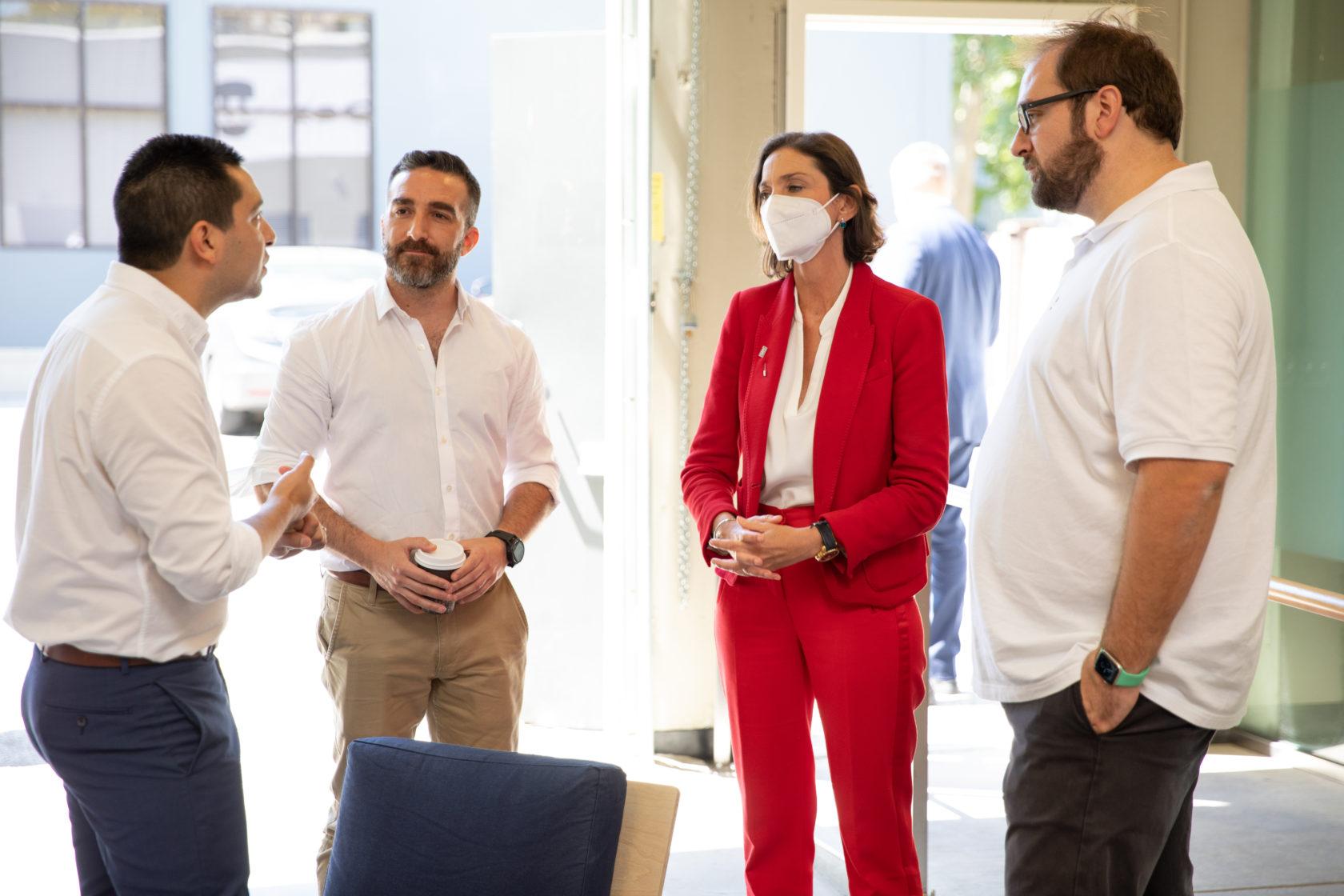 The Minister of Industry, Trade and Tourism, Reyes Maroto, visited Wallbox’s headquarters in the United States

The Minister of Industry, Trade and Tourism, Reyes Maroto, visited Wallbox’s headquarters in the United States

BARCELONA, SPAIN / MOUNTAIN VIEW, CALIFORNIA – 26 July 2021 - Wallbox, a leading provider of electric vehicle charging solutions welcomed the Minister of Industry, Trade and Tourism, Reyes Maroto, to their North American headquarters in Mountain View (California, United States) last Friday. The tour followed Maroto's visit to Wallbox’s Barcelona factory to see the assembly line (October 2020), and served to give the minister greater insight into how the company's U.S. expansion would be a catalyst for further growth in Spain, especially in terms of engineering and Research and Development. In addition to the Minister and part of her cabinet, this special visit was attended by Francisco Polo, High Commissioner for Spain’s Entrepreneurial Nation; members of his team, the Spanish Prime Minister’s cabinet, and of the Spanish Commercial Office of Los Angeles; and other key Spanish businessmen.

During the visit, Enric Asunción, CEO and co-founder of Wallbox, hosted the official delegation, showcasing the company's commitment to electromobility. "I am proud to be able to show Minister Reyes Maroto and her team how a Spanish company can successfully serve a global market and bring Spanish talent and knowledge to the world. Thanks to our commitment to innovation and the work of our continuously evolving team, we have become influential players in leading markets outside of Spain - which will accelerate business demand and innovation locally." said Enric Asunción.

Trade mission with the President of the Spanish Government

This visit by the Minister of Industry, Trade and Tourism to Wallbox’s NA HQ formed part of the trade mission led by Pedro Sánchez, President of the Spanish Government, that included Enric Asunción and other high profile Spanish businessmen. The objective of this trip was to boost business collaboration between the United States and Spain and included visits with government officials, prominent business leaders, investors and media in New York, Los Angeles and San Francisco.

"For Wallbox, being selected by the Cabinet of the President of the Government for this trip has represented a unique opportunity to highlight electromobility as both an economic and sustainability pillar. Our participation in this trade mission has allowed us to present our technology to key stakeholders in the United States and demonstrate first hand Spain’s contribution to the global EV market”, said Enric Asunción.

Between 21 to 23 July, Enric Asunción took part in various events to raise awareness of the talent and entrepreneurial spirit that exists in Spain and to highlight the value of our country as a leader in innovation and business. Included in the official tour was a visit to the Apple campus in Cupertino, a meeting with venture capitalists at the HP campus in Palo Alto, and an event with Spanish entrepreneurs and talent in Silicon Valley.

During his time in the U.S. Enric Asunción also toured the New York Stock Exchange with Justin Mirro, CEO of Kensington. This visit was held under the pretext of the business combination between both entities, which will result in Wallbox becoming a company listed on the New York Stock Exchange under the ticker symbol "WBX" (more information here).

Enric Asunción also had the opportunity to meet with Nicole Nason, who was the 26th Administrator of the Federal Highway Administration (FHWA) at the U.S. Department of Transportation and a current member of the Kensington Board of Directors; and with Peter Faricy, CEO of Sunpower, the second largest solar panel company in the United States.

Founded in 2015, Wallbox is a provider of integrated smart charging and energy management solutions for residential, semi-public and public use. The company has sold more than 100,000 charger units to date and offers the only two-way DC residential charging unit on the market. It has nine offices on three continents and sells its products in 67 countries, including the United States from early 2021. With two factories in Barcelona, Wallbox is currently looking for a location in the United States for the creation of its third production plant.

Wallbox is a global company, dedicated to changing the way the world uses energy in the electric vehicle industry. Wallbox creates smart charging systems that combine innovative technology with outstanding design and manage the communication between vehicle, grid, building and charger. Wallbox offers a complete portfolio of charging and energy management solutions for residential, semi-public and public use in more than 60 countries.

Founded in 2015, with headquarters in Barcelona, Wallbox’s mission is to facilitate the adoption of electric vehicles today to make more sustainable use of energy tomorrow. The company employs over 500 people in Europe, Asia, and the Americas.

Wallbox and Kensington announced a business combination in June 2021 that is expected to result in Wallbox becoming a publicly traded company on the NYSE under the ticker symbol “WBX”.

Kensington Capital Acquisition Corp. II (NYSE: KCAC) is a special purpose acquisition company formed for the purpose of effecting a merger, stock purchase or similar business combination with a business in the automotive and automotive-related sector. The company is sponsored by Kensington Capital Partners (“KCP”) and the management team of Justin Mirro, Bob Remenar, Simon Boag and Dan Huber. The company is also supported by a board of independent directors including Tom LaSorda, Nicole Nason, Anders Pettersson, Mitch Quain, Don Runkle and Matt Simoncini. The Kensington team has completed over 70 automotive transactions and has over 300 years of combined experience leading some of the largest automotive companies in the world.

This communication is being made in respect of the proposed transaction involving Wallbox Chargers, S.L. (“Wallbox”), Wallbox B.V. and Kensington Capital Acquisition Corp. II (“Kensington”). This communication does not constitute an offer to sell or the solicitation of an offer to buy any securities or a solicitation of any vote or approval, nor shall there be any sale of securities in any jurisdiction in which such offer, solicitation or sale would be unlawful prior to registration or qualification under the securities laws of such jurisdiction. In connection with the proposed transaction, Wallbox B.V. will file with the Securities and Exchange Commission (“SEC”) a registration statement on Form F-4 that will include a proxy statement of Kensington in connection with Kensington’s solicitation of proxies for the vote by Kensington’s shareholders with respect to the proposed transaction and other matters as may be described in the registration statement. Wallbox and Kensington also plan to file other documents with the SEC regarding the proposed transaction and a proxy statement/prospectus will be mailed to holders of shares of Kensington’s Class A ordinary shares. BEFORE MAKING ANY VOTING OR INVESTMENT DECISION, INVESTORS ARE URGED TO READ THE FORM F-4 AND THE PROXY STATEMENT/PROSPECTUS REGARDING THE PROPOSED TRANSACTION AND ANY OTHER RELEVANT DOCUMENTS CAREFULLY IN THEIR ENTIRETY WHEN THEY BECOME AVAILABLE BECAUSE THEY WILL CONTAIN IMPORTANT INFORMATION ABOUT THE PROPOSED TRANSACTION. The proxy statement/prospectus, as well as other filings containing information about Wallbox and Kensington will be available without charge at the SEC’s Internet site (http://www.sec.gov). Copies of the proxy statement/prospectus can also be obtained, when available, without charge, from Wallbox’s website at www.wallbox.com. Copies of the proxy statement/prospectus can be obtained, when available, without charge, from Kensington’s website at www.autospac.com.

Participants in the Solicitations

Wallbox, Wallbox B.V., Kensington and certain of their respective directors, executive officers and other members of management and employees may, under SEC rules, be deemed to be participants in the solicitation of proxies from Kensington’s shareholders in connection with the proposed transaction. You can find more information about Kensington’s directors and executive officers in Kensington’s final prospectus dated February 25, 2021 and filed with the SEC on February 26, 2021. Additional information regarding the participants in the proxy solicitation and a description of their direct and indirect interests will be included in the proxy statement/prospectus when it becomes available. Shareholders, potential investors and other interested persons should read the proxy statement/prospectus carefully when it becomes available before making any voting or investment decisions. You may obtain free copies of these documents from the sources indicated above.

No Offer or Solicitation

How can we help you?