Why Bidirectional Charging is The Next Big Thing for EV Owners

Owning an EV gives you access to much more than just a greener lifestyle. With bidirectional EV charging, you can actually make money from your EV, among other exciting benefits. Have you heard of bidirectional EV chargers and are thinking of buying one for your EV but still not really sure what they do? This is a common issue for many EV owners approaching the charging world. You try looking for some information online and before you know it, you’re lost in a sea of technical buzzwords, seven hyperlinks deep into a Wikipedia search that started with bidirectional EV charging and somehow ended with Jennifer Lopez. This article is your lighthouse: it will give you some background on what bidirectional EV charging means and how it works. We’ll then spell out the concrete benefits it can bring you as an EV owner.

Firstly, What is Bidirectional Charging and How Does it Work?

But how does this work? Well, when an EV is charged, AC (alternating current) electricity from the grid is converted to DC (direct current) electricity, the kind that can be used by a car. This conversion is carried out by either the car’s own converter or a converter located in the charger. Then, when you want to use that energy stored in the EV’s battery for a house or send it back to the grid, the DC electricity used in the car logically has to be converted back to AC electricity. Although currently there aren’t many bidirectional EV chargers out there, all contain internal converters. This means that they can handle the electrical conversion back from DC to AC. They can even control the amount of power supplied to and from the battery.

Secondly, a Common Question: What Is the Difference Between Bidirectional Charging and Smart Charging?

Smart charging refers to any kind of EV charging (uni or bidirectional) in which the charging time and rate can be controlled by a “smart” device, rather than a manual on/off switch. This is done using data connections between the EV and the charger. Consider Smart EV charging apps, for instance, which allow you to control how long your EV is charged by using your smartphone. With smart charging, cars can be plugged in but they don’t have to actually be charging the whole time. Instead, individual EV owners or energy companies can decide when it’s most efficient to charge energy in terms of demand and cost, depending on the country and the energy operator. This can sometimes bring economic benefits for customers. For instance, many energy companies may offer preferential rates for night-charging. This also helps avoid situations in which a large proportion of EV owners charge at the same time, overloading the energy supply grid.

What Is Bidirectional or “Two-way” Charging Used For?

Bidirectional charging allows energy to flow both ways - in and out of your car. But where exactly does the energy go when it’s flowing out of your car?

V2G is when a bidirectional EV charger is used to supply power (electricity) from an EV car’s battery to the grid via a DC to AC converter system usually embedded in the EV charger. V2G can be used to help balance and settle local, regional or national energy needs via smart charging. It allows EVs to charge during off-peak hours and give back to the grid during peak hours, when there is extra energy demand. This makes perfect sense: cars sit in parking spaces 95% of the time, thus with careful planning and the right infrastructure, parked and plugged-in EVs could become mass power banks, stabilizing the electric grids of the future. In this way, we can think of EVs as big batteries on wheels, helping to make sure that there is always enough energy for everyone at any given time.

V2H is when a bidirectional EV charger is used to supply power (electricity) from an EV Car’s battery to a house or, possibly, another kind of building. This is done via a DC to AC converter system usually embedded within the EV charger. Like V2G, V2H can also help to make balance and settle, at a larger scale, local or even national supply grids. For instance, by charging up your EV at night when there is less electrical demand and then using that electricity to power your home during the daytime, you could actually contribute to reducing consumption during peak periods when there is more electrical demand and more pressure on the grid. V2H can, therefore, help make sure our homes have enough power when they most need it, notably during power outages. As a result, it can also reduce the pressure on the electricity grid as a whole.

Both V2G and V2H may become more important as we move towards totally renewable energy systems. This is because different renewable energy sources tend to produce variable amounts of energy depending on the time of day or season. For instance, solar panels clearly capture the most energy during the day, wind turbines when it is windy, and so on. With bidirectional charging, the full potential of EV battery storage can be realized to benefit the entire energy system - and the planet! In other words, EVs can be used for renewable load following: capturing and storing excess solar or wind power when it is generated so that it can be made available for use during times of high demand, or when energy production is unusually low.

What Are the Benefits of Bidirectional Charging? 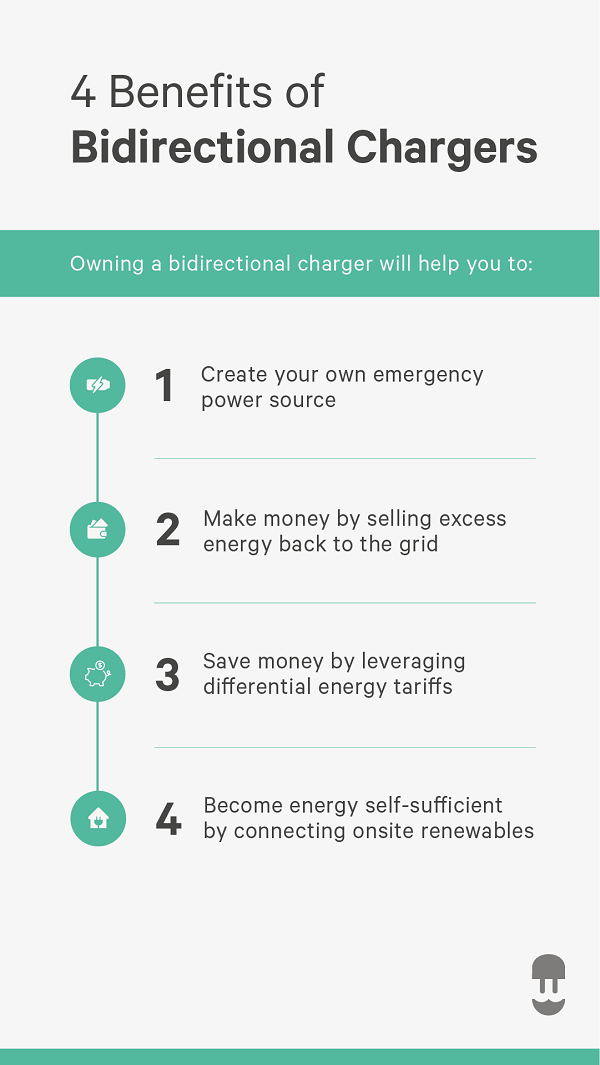 By using a bidirectional EV charger to charge your EV from your home’s energy supply, your car can then act as a source of energy (via its battery storage) during power outages or shortages. This will become more important as we move towards totally renewable energy systems. It’s not that renewable energies are more unreliable than fossil fuels, as is often falsely suggested - in some cases, they have been shown to actually strengthen grid resilience. However, as renewable sources of energy are often physically climate-vulnerable to natural hazards, climate change’s tendency to bring about more erratic weather patterns may increase the chances of power outages.

Countries prone to natural hazards are thus increasingly encouraging EV owners to go bidirectional, or even setting up projects that use EVs as emergency energy sources. For example, in Japan, a country frequently hit by natural disasters like the 2011 tsunami, Nissan has recently signed an agreement with Tokyo’s Nerima Ward and the city of Yokosuka to provide EVs for free in emergency situations. EVs may, therefore, provide an important emergency energy source in times of need for homes that have been affected by power shortages. After all, some EV batteries can power a home for up to three days.

Make Money by Giving Energy Back to the Grid

As an EV owner with a bidirectional EV charger, you can actually make money from your car by selling excess energy in your EV’s battery back to the grid. Any energy collected and stored in your EV’s battery can be sold back to the grid; whether it originates from your own energy source, such as solar panels on your roof, from renewable load following, from your home’s power source or from your local supermarket charger. Countries in which energy prices differ throughout the day, such as Spain, or where energy companies offer preferential off-peak charging tariffs, such as the UK, offer EV owners the opportunity to make even more money by offering cheaper charging during off-peak hours and selling energy back to the grid during expensive peak hours. Initial studies on the potential income an EV could bring its owner through V2G estimate figures of around €400 a year. For the lifetime of an EV, the average potential revenue from V2G for an EV owner is estimated to be around €3700. If you get into the frequency regulation market, you could make even more money. For example, Nuuve Corporation, a leading V2G pilot program, is currently testing 30 electric vehicles for the frequency regulation market in Denmark and estimates that EV owners will be able to earn up to €9,000 over the lifetime of the car.

Owning an EV is already significantly cheaper than owning one of their fossil-fuel-guzzling rivals. Canadian academic, Ingrid Malmgren, estimates a total saving of around €5000 over the lifetime of a vehicle. With a bidirectional charger, instead of a unidirectional one, you can save even more if you live in a country where energy costs vary during the day. For instance, in some countries, like Spain, if you charge your vehicle during the night when electrical demand is low, you will pay less for electricity than during the day’s peak hours.

On top of this, many energy companies and national governments are actually offering incentives (price cuts) to EV drivers to encourage them to charge during off-peak hours, making the electricity even cheaper. Indeed, some energy companies now offer off-peak or “differential” energy tariffs to EV owners, where you may pay normal prices during the day, but cheaper rates for a certain number of hours during the night. This is a way to help balance the grid and make sure not all EVs are charging during peak demand hours. If you then use this electricity, stored in your EV, to power your house during the day, you will be able to use much cheaper energy than you would normally pay during those hours. Over time, this will mean serious cuts to your electricity bill. 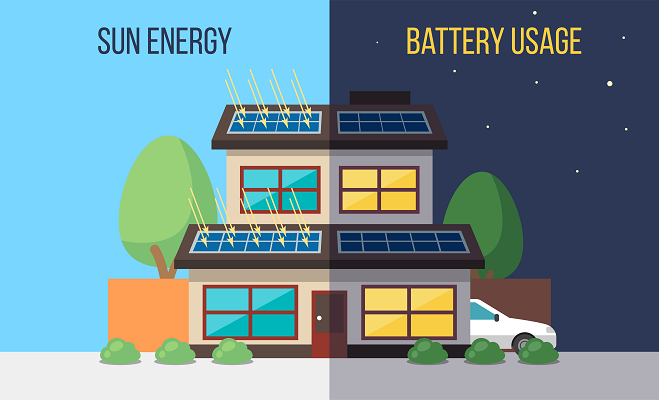 Bidirectional EV charging can offer you the opportunity to become energy self-sufficient, if you combine it with your own renewable energy power sources. Think about it: if you have solar panels on your roof that power your house during the day, any excess energy generated can be stored in your EV and used at night, or the next day at home, or when you’re driving.

Some countries are introducing programs and incentives to help individuals to do precisely this. For example, the demand side response (DSR) scheme in the UK gives homeowners smart meters and empowers them to generate their own energy via onsite renewables, like wind and solar photovoltaic. It also helps them to feed excess energy back to the network. With the help of such schemes and other EV and EV charging incentives, present across Europe, your home could very well become its own micro-power station soon!

This principle applies not only to individual homes but also to larger apartment blocks and even communities. While apartment block charging has traditionally been a problem for a number of reasons (83% of house owners state that they charge at home, whereas only 13% of residents in apartment buildings say the same) energy self-sufficiency may actually help to solve this problem by pooling energy between residents in a more centralized way. For instance, schemes like the Brooklyn Micro-grid, a New York-based energy marketplace for renewable, local, resident-produced energy. Indeed, others that seek to produce energy as a community could well use EVs to capture, store and sell back energy to their micro-grid. In this way, bidirectional charging could be a potentially crucial part of community-led renewable energy generation schemes that seek to communitarize energy resources within a self-sufficient community, not just one household.

Bidirectional technology (allowing electricity to flow into and out of EVs) has only just become advanced enough for more people to use it. As the tech gets better with time, so will its potentialities. As an EV owner, you only stand to gain by going for a bidirectional charger. From turning your EV into an emergency power source, to making extra income by selling energy back to the grid, to becoming energy self-sufficient - going bidirectional comes with clear pay-offs.

Do you want to learn more about Wallbox?